A Journey in the Southern Ocean on a Sunsail 444 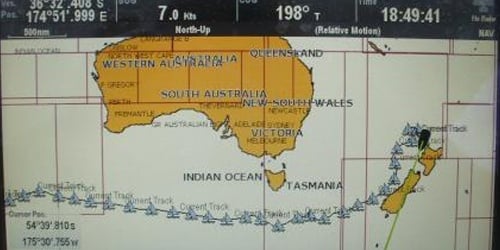 Captain Kirsten has skillfully completed another transoceanic delivery for us, bringing a Sunsail 444 (Leopard 44) through the upper roaring 40s (highest southern latitude almost 49°S, south of Tasmania), a snowstorm, and heavy winds and seas. Transoceanic deliveries on Sunsail 444s are nothing new for this talented skipper, who described her Indian Ocean crossing on the Leopard 44 (Sunsail 444) for us a couple of years ago. Her statement after this most recent trip: The Sunsail 444 still impresses me with the way it handles the sea! Certainly a success for the hull design!

Kirsten provided some more details about the conditions she and the crew faced, and some of the decisions she made at sea, before heading off on another adventure:

We had been experiencing NW-SW winds, gusting in excess of 70 knots (TRUE), but staying above 45 knots (TRUE) for more than 40 hours, which, of course did make the sea-state pick up considerably. Also, once the centre of the system had passed, the wind shifted quite suddenly from NW to SW, creating a swell interference pattern and further allowing the sea to build. We ran bare-pole for the majority of that time, sometimes getting surfs over 25 knots of boat speed. Any higher speeds, and I would have deployed a drogue - toss-up of surfing too fast and hitting the succeeding swell in the trough, or taking breaking waves over the stern.

Kirsten N. is a native of South Africa and typically skippers at least two longer ocean-crossing deliveries each year, as well as a number a shorter coastal trips.

Daniela is a digital project manager for our yacht sales websites. She's been in the sailing industry since her first job as a junior sailing instructor in 1996.
daniela.clark@thlmarine.com